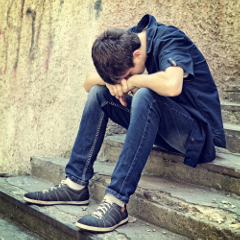 Stephen has Asperger’s Syndrome and like many people who have autism, he struggles to relate to and communicate with others around him. Stephen spent lots of time in a specialist boarding school when he was younger as he had a troubled and often unhappy relationship with his mother.

Stephen is a very talented artist - he completed a Fine Art degree at University, but his mother did not want him to return home, leaving him homeless.

hyh began working with Stephen when he was staying with his girlfriend’s family in accommodation which was unsuitable for someone who has Asperger’s.

hyh found Stephen a voluntary placement at the Tate Modern, and he loved it – he’s still volunteering there. And, as well as supporting him to claim DLA (Disability Living Allowance), hyh helped him to find part time paid employment at a local sports centre and worked closely with Herts County Council to get Stephen his own Asperger’s worker.

Stephen has learned about budgeting and hyh has helped him to join a credit union, and further close work with the Council resulted in him moving into a small house in North Herts which perfectly meets his needs!

Without hyh’s involvement Stephen would have been waiting many years for the housing he is entitled to, and would be facing an uncertain future. He can now enjoy a stable situation, with ongoing support.

hyh will continue working with Stephen and teach him the skills he will need to live independently and sustain his new tenancy.