Fall for homelessness – Lake leap is a bungee jump to remember

It was a bright and sunny morning when crowds turned out to watch their nearest and dearest take the fall for homelessness last Sunday. The scene at Stanborough lakes (Welwyn Garden City) was calm in the crisp autumnal air, but looming over the water was a menacing 160ft crane, dangling from it, a small rickety metal cage. As fundraisers began to arrive and noticed the crane from the car park, fear began to set in. However participants were put at ease by the fantastic team from UK bungee who blasted out music, reassured participants and hyped up those that had a case of ‘the shakes’. As the first jumper took to the ‘the cage’ and dived out over the lakes the crowd whooped and cheered in appreciation.

More than 30 people took the leap and through independent fundraising have managed to raise over £4000 for HYHG and YMCA Central with money still coming in!

Among the 30 was Shane Collie, General Manager of ASDA in Hatfield, as well as housing minister Grant Shapps who seemed nervous at first ‘hoping that no-one with an axe to grind has severed the rope’ but ‘enjoyed it much more that I thought I would!’

Onlooker Guy Norton said that ‘I think it’s great that these two charities have put their heads together to come up with something fun and exciting. Even as a spectator, I’ve had a fantastic day’

Congratulations to everyone who took part!

Photos from the event can be seen here. 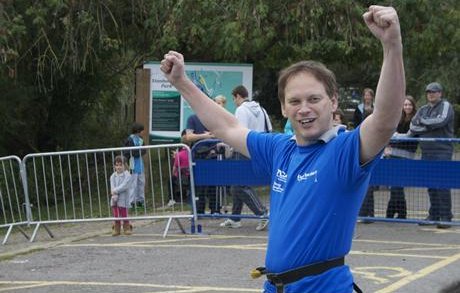